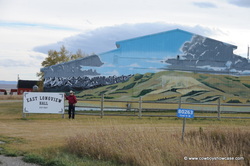 Just when you think that the legendary Canadian cowboy, singer and songwriter Ian Tyson has no more new songs left in his war bag, he comes up with this gem. Ian has written and produced a new single titled “Saddle Bronc Girl.” This song is about a real-life lady saddle bronc rider by the name of Kaila Mussell and the music and lyrics rival those of any of Tyson’s classic hit songs.  The lyrics tell her unique story in a quick picturesque style- “She’s a saddle bronc girl/ She is one of a kind/ Drives a beat-up Chevy hatchback/ and it moves her down the line.  Big bronc awaitin’ in a town just up ahead/ Better hold on tight/ Get tapped off just right/ Saddle Bronc Girl.”

Ian drove to Kamloops, B.C from his ranch south of Calgary, Alberta to interview Kaila last spring.  Tyson said, “This is the farthest I ever drove to interview someone for a song, but it was worth the drive.”

Kaila is a 33-year old professional saddle bronc rider who is reportedly the only female to ride broncs professionally on the Pro Rodeo circuit in North America. She comes from the Chilliwack B.C. country and grew up on the Skwah Indian Reserve. Her family has always been involved in the sport of rodeo. Kaila has been riding broncs professionally for the past 11 years.  This lady has been through the wringer on the pro circuit going from one injury to another. Kaila said, “I have been through a lot in my sport and it has been challenging but it has been worth the effort.” Most people would be surprised to know that Kailia bankrolled her own rodeo expenses with no sponsor to help.  She made 50 rodeos last year. Kaila says, “Rodeoing for a living is realistically like an expensive hobby. It is not a piece of cake going down the rodeo road and I have learned a lot about myself along the way.”

The 33 year old is at the crossroads of her life, deciding which way to head in the future. One of the lines from the song seems an echo of where she is in her rodeo career. “Hey Kaila!  Hey Kaila, whatcha gonna do? How far are you gonna go to make the dream come true?”

Ian Tyson is doing a concert in her hometown of Chilliwack B.C. on Nov 14th and you can be sure that Kaila and Tyson’s fans will fill the auditorium.

This “Saddle Bronc Girl” single can be purchased from

Ian Tyson can be reached through his Web site http://www.iantyson.com/